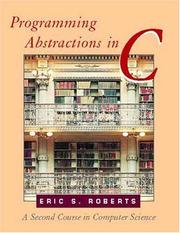 Programming Abstractions in C - A Second Course in Computer Science

In summary I feel many programmers/engineers who have restricted algorithm/abstraction knowledge would learn a great deal from this book.

This book is intended to be used in a second programming course in a college or university, either by students or instructors; as part of the CS2 curriculum. Although the book is primarily aimed at students learning computer science, I believe many junior (and some experienced) programmers/engineers would learn from this text.

The book is divided into four main parts. Part one (Preliminaries) gives an overview of ANSI C, data types in C and libraries and interfaces. The chapters in this part explain all the main areas of C in an understandable manner in some detail, however the less experienced person may need (and indeed should) read this part at least twice to fully appreciate the later parts. This part also introduces an extensive set of libraries that are used throughout the book, these are obtained by FTP.

Part three (Data Abstraction) builds on part two by giving detailed descriptions and non-recursive implementations of basic ADTs and how these can be improved for efficiency. The main examples used are stacks, editors, queues and simulations, symbol tables, hashing, mapping and iterators.

The book contains full implementations of all the subjects covered. There is also a large section at the end of each chapter containing a summary, review questions and programming exercises.

In summary I feel many programmers/engineers who have restricted algorithm/abstraction knowledge would learn a great deal from this book.