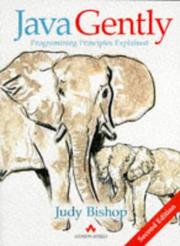 Definitely worth considering as a first Java text. Highly recommended!

Java is the first programming language on many undergraduate computer science and IT courses and the first edition of this book was one of the earliest texts to target this market. The first edition has now been superseded by the second edition and my review concentrates on that. However, my comments also apply to the first so long as one appreciates that it covers Java 1.0.

The second edition reflects the updates to Java 1.1. It starts by giving a feel for the power and facilities of Java by getting the reader to access the Java Gently web site which demonstrates frames, menus, buttons, textfields, etc. It then introduces OMT design notation (which is used throughout the book to describe object and relationships); some simple programs looking at numeric output and OO within the context of Java packages and classes. Chapter three looks at more realistic programs using loops and methods and finishes with a case study implementing tickets for a school fete (using multiple classes). Because Java input is fundamentally string based numeric input is a problem (there is no equivalent to

) with the user having to read a string and then parse it to extract information. Chapter four introduces class Text (available from the web site) which provides simple methods for numeric input; this is then used in following chapters to read information to control program flow (the Text class itself is described in detail in Chapter seven which discusses I/O formatting and tokenizers). Later chapters build on these basic facilities to cover abstraction and inheritance, the AWT, threads, networking, etc.

This is a very good introductory Java text at an affordable price, which follows a philosophy of using examples that catch and maintain the interest of students. The explanations are clear, with plenty of screen displays, OMT classes diagrams (I would have preferred the use of UML design notation) and example programs (many of which are reasonable sized programs so readers can appreciate and understand OO techniques). Definitely worth considering as a first Java text. Highly recommended!