REVIEW - Beyond MIDI - The Handbook of Musical Codes 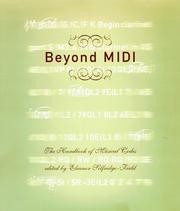 Beyond MIDI - The Handbook of Musical Codes

I would like to have read this book before starting work on my own music program. I think that anybody with work (or serious interest) in this field should read it if possible.

This book is mainly a collection of contributed chapters each describing a musical code, usually the format of an input or data file for a music program. They do not usually attempt to make a comprehensive description, but enough to give the reader a good idea of what the code is like, usually enough to implement an interpreter of a reasonable functionality.

Readers looking for a description of a particular code would be advised to check first, as there are some notable omissions. This is not an inadequacy on the part of the publishers, as obtaining permission can be difficult. It is also possible that the are important omissions due more to the editors not knowing of the existence of the code (well nobody ever asked me about mine J). Perhaps more serious is the fact that the chapters were contributed over a number of years and some of the earlier ones, including contact details, were not updated prior to printing.

The book distinguishes between three types of music program, depending on whether its primary function is to play sound, to produce printed notation, or to aid in analysis and research. It also describes some proposed interchange formats.

The descriptions are authoritative wherever possible, being obtained from the authors of the programs in question or other experts. There are some annoying 'typos' such as swapped or missing examples and incorrect appendix definitions, but they should be obvious enough not to mislead many. The inclusion of English Braille and the proposed New International Standard has to be commended (well I may be biased).

The book concludes with a section entitled 'Reflections', which seems to equate 'difficult' with 'impossible' in an alarming way. Despite the title of the section, I don't think that it is clear enough that the reader has now left the factual 'this byte does that' world of file formats and is entering that of opinion, mostly about interchange possibilities. There are also some guidelines for those who find it necessary to write a new music code.

I would like to have read this book before starting work on my own music program. I think that anybody with work (or serious interest) in this field should read it if possible (although I have no pricing information). It is well typeset and could easily also be used as a reference work, although you may find that it seems to have everything except what you are looking for.