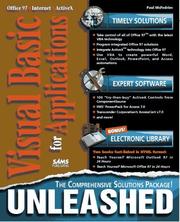 This book deals with VBA version 5 - the one provided with Office 97. Visual Basic has always been a good language and now, with Office 97, it supports objects and is bundled with an immensely powerful set of class libraries that deliver the entire functionality of Office 97.

In order to use VBA effectively you need to know how to program; the language; and the object models. In Visual Basic for Applications Unleashed, Paul McFedries chooses to concentrate on the language and the object models. He does a pretty good job with each. The description of the language is quite thoughtful. I noted a few errors (the most misleading being 'a function... can't modify its environment'), but in general the advice is sound. McFedries' decision to identify and illustrate the most important elements of the object models rather than attempt to cover the models in their entirety is also sound. I would however have liked him to have included a list of all the objects and properties.

The accompanying CD contains source code for all examples, but the examples tend to be so short and so basic, that I doubt that it will often be loaded.

I regard this book as a more thorough alternative to the manual and, being the normal 'Unleashed' size, it contains a lot of information. McFedries' coverage of the most important idioms will prove useful, even for those already familiar with a previous version of the language. Anyone wanting a book covering this ground should look also at Microsoft's Visual Basic Programmers Guide