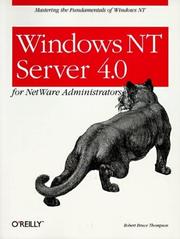 This book looked interesting for two reasons. Firstly, it's from O'Reilly, so I expected it to be intelligently written. Secondly, the Netware orientation was appropriate for me. Overall, it met my expectations on both counts.

The book begins with a comparison of NT and Netware, but although Thompson acknowledges Netware 4, the focus of the comparison, here and for most of the book, is Netware 3. This was disappointing and, in the feature comparisons unfair to Novell, but Thompson seems to have in mind readers from organisations likely to move to NT as an alternative to Netware 4. Thompson also ends on a Netware note, devoting the last fifth of the book to the co-existence and migration tools that Microsoft provides. I have not seen these so well covered before, and may well investigate the NT-based 'Directory Service Manager for Netware' as a means of administering the twenty or so Netware 3 servers with which I am concerned at work. Novell products, such as NDS for NT, are not covered. In the remainder of the book I did not find that Thompson's allusions to Netware were particularly illuminating or important. For example, I would have liked a more comparative treatment of the Microsoft 'share' concept. During the review period I have had occasion to troubleshoot NT-in-Netware environment issues, but this book did not help me.

Although the book covers the hands-on instructions that NT administrators will need, the proportion devoted to comment and discussion is relatively high and there is far less space devoted to screen shots than in some of the competing volumes. Thompson succeeds in conveying his expertise, both concerning NT and other, more or less related, IT topics. For example, there is a good chapter on IP addressing and a good section on backup media, both of which I would expect to refer to in the future.

If a single NT reference were to be acquired, I would go for the Resource Kit, but this is one of the better books on NT that I have seen, particularly for those working in a Netware environment.