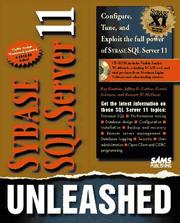 The book is a re-work of the well-respected Sybase 10 version and follows in its footsteps. It is a wide ranging book covering Sybase running on all the major platforms as well as everything from installation, system administration, system tuning and the use of Sybase's own variant of standard SQL (Transact/SQL). Most of the book is spent on the latter but it also does a good job on all of the major topics with the one exception; no mention is made of the Window based tools that come with the NT version.

It also gives a flavour of the client end libraries (there are two of them), but since this only occupies about 40 out of the 1150 pages which make up the book the coverage is necessarily minimal.

The book comes with a CD of trial versions of a number of pieces of software. The cover would have you believe that one of the inclusions alone is worth $595 but in reality it is a heavily restricted version of a $2,995 product. It is worth a look but not reason enough to buy the book.

If your are looking for a book that will give you details of how to drive the client API from C or C++ then this will not solve your problem. This is not to say that the book won't be of use, it just isn't that part of the picture.

If on the other hand you are looking for a book that will tell you pretty much everything else you want to know about Sybase (and with a single index, unlike Sybase's own documentation) then this book is worth consulting. No book, even one this size, can cover the whole of this big an area exhaustively; it is to the authors' credit that the cover as much as they do in a single volume. Certainly our office copies are much more likely to be found on a developers desk than on a shelf.