REVIEW - Minimalism Beyond the Nurnberg Funnel 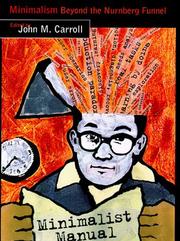 Minimalism Beyond the Nurnberg Funnel

If you are responsible for learning materials or have any influence on the documentation (including computer based) for your company's products I think you should know both about this book and its predecessor.

Several years ago the author wrote The Nurnberg Funnel which presented a minimalist approach to instruction design. This was based on studies of the problems created by the way people actually acquire computer skills. These are very different from those that many expect. For example there is little point in writing a manual assuming that the typical user is going to read it the way you wrote it. When did you last read a manual that came with your software by starting at the beginning?

The idea of minimalism is to try to provide well-structured learning materials that are likely to work well with a wide range of real learning strategies. If I had to extract a single characteristic it is that people learn best when motivated by a need to know coupled with a sense that their time is not being wasted. This is so obvious to me that I found it surprising that most of my colleagues when I was a teacher found the idea strange and difficult to believe. For example, I got even the slowest of my pupils happily using a word processor (at that time, Microsoft Word 2 for DOS) by getting them to use one to write me a story that included five specified items (as bizarre as possible - e.g. I once specified: a cherry stone, an ugly princess, an elm tree, a flash of lightening and cod-liver oil) in collaboration with one or two of their peers. They enjoyed the exercise and learnt about the tool as a side effect of doing something they found fun. Very few of us are motivated to learn to use a tool for its own sake. And most of us want to see quick results.

This book is a collection of papers on a wide range of aspects of minimalism. If you are responsible for learning materials or have any influence on the documentation (including computer based) for your company's products I think you should know both about this book and its predecessor. Even though many of the ideas may seem self-evident to some of us I think they deserve to be better known. By the way, well written minimalist training materials may be relatively brief but that actually takes far more skill and time than writing the normal verbose kind. I think it was Mark Twain who apologised for a long letter on the grounds that he did not have time to writea short one. That is a sentiment deserves to be better known.