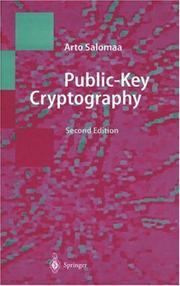 This book gives a good introduction to cryptography and although it gets quite mathematical later on the first two chapters give one of the best introductions I have ever seen to the subject.

Several examples of encryption are given in these early stages which are easy to understand and whet your appetite for the subject ahead. In fact, it is almost like reading one of those secret codes books some of us bought when we were young, after which we rush-ed out to communicate with all our friends in code, much to the annoyance of those outside the group.

Chapter two introduces us to public-key encryption. This is a method whereby you can publicly announce the method you use to encrypt data but, as long as you do not reveal the key, somebody intercepting it still cannot understand the message.

These initial chapters serve as a good foundation for the rest of the book, with several key definitions being given.

From chapter three onwards (there are only six chapters) we are shown various types of encryption.

The book concludes with tutorials on complexity theory and number theory.

To get the most from this book you have to be fairly confident in reading mathematical material. I would like to have seen the book continue as it did throughout the first two chapters, but that would have precluded it from many university reading lists.

Would I buy it? For the first two chapters yes. For the other four no? But then mathematics is not my strongest suit.