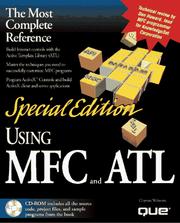 Another book to join the many on MFC. Code examples are supplied on the accompanying CD. The CD also contains HTML versions of this book and also Special Edition Using Visual C++ 4.2.

Actually this isn't so much a book about MFC as about using the wizards supplied with Microsoft's Visual C++. I think anyone planning to do anything with MFC in the real world will need a more detailed coverage, such as that offered by competing books from the Microsoft Press or (especially) the Wrox Press.

Despite the title, the book includes only a couple of chapters on the ATL (Active Template Library). The ATL, a recent addition to the components supplied with Visual C++, is a class library aimed at helping with the development of COM components. Again this book provides little more than a guide to using the Wizards. I believe anyone wanting to know about ATL will need more detailed information, especially given the important role ATL is set to play in COM development.

If you want to develop the simplest of applications and all you want is a guide to using the Visual C++ Wizards, then this might be the book for you. It covers a lot of ground, but none of it in much detail. Although expensive at£46.99, it may appear cheaper on a cost/coverage basis than much of the competition. However, I think for most developers it will prove a false economy and their money would be better spent on the competing books mentioned above.