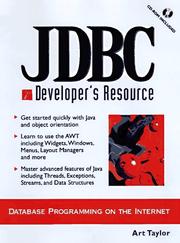 This is about the Java JDBC interface, which allows Java programs to access databases, using a database independent API, in much the same way as Microsoft's ODBC does for C programs. It comes with a CD with all the examples, as well as an ODBC driver pack, JDK1.02 and an evaluation copy of Mojo. The second half of the book is a reference, which is better than it sounds, since most major methods get a little example of their use, which I always find useful.

The book starts from the fundamentals of basic SQL, before moving rapidly onto the call level interface, explaining important points such as cursors along the way. The text is generally clear and well explained and goes into a good level of detail in most places. My only major complaint is the layout. The book is 730 pages long, but probably could have fitted in 500 with better formatting. As the text explains (in a big point size!) a new feature, a snippet of code from a complete example is presented. Why, when the complete example is on CD, do we need the code re-printing as a single unit, using a terrible layout with so many blank lines? For example page 281 contains only code. If we don't count blank lines and lines containing only braces, we find just 11 lines with code. Not only wasteful, but difficult to read as well.