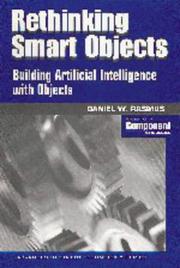 This is one of those books that are based on previously- published magazine articles. However there is a common purpose to the book, which is to bring AI tools and techniques to the notice of the mainstream IT practitioner. Rasmus believes that AI is often overlooked and that it has some unique qualities, which will be increasingly of value in the increasingly fluid world of Internet and Intranet.

This is all fair enough, though if I were one of the 'non-technical managers' addressed by the blurb on the back of the book I would not be impressed by Rasmus' approach. He makes bold assertions such as

'the combination of direct support for data access as well as rule-driven SQL development make expert systems formidable companions in the search for meaning in a sea of corporate data' , with little by way of real justification. It comes across as a sales pitch, albeit for a technology rather than a particular product.

It is when he speculates about future developments that his argument really goes off the rails:

'our encounters with knowledge objects will generate new objects that retain our thought patterns, our curiosities and our opinions' . Yes and we'll be sending thinking space-ships between galaxies at near light-speed. Sorry for the sarcasm, but I fail to see the point of such speculation in a book which purports to be a source of guidance and information. It makes it harder to take his more sensible assertions seriously. Not recommended.