REVIEW - On to Java 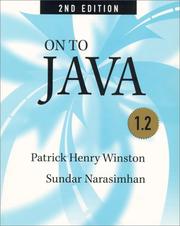 This is yet another Java introductory text, this time with the supposed aim of teaching the experienced programmer a new language. The first thing that strikes one is the size, or rather the lack of it, of this volume, for it must be one of the smallest books on the subject - a mere 360 pages compared to say 'Java in a Nutshell', which weighs in at 610 pages. So if one were to buy this book, one ought to budget for a good reference as well.

The style adopted is one of numbered points, each one supposedly teaching a simple idea, building on one another so that the reader is never overtaxed. The trouble is that a very flat style has been adopted which makes the overall effect tedious to read. I have to confess that I was forced to skim this book even more than I normally do when reviewing, to avoid falling asleep. For the reader to whom this is all new there is another more significant disadvantage, in that when flipping through trying to find some particular nugget of information there are few visual cues to aid one's quest.

The writers fall into the usual trap of books at this level, in failing to teach best practice. One begins to feel that academics, who after all are responsible for most of these books, fail to appreciate the importanOfficial Guide to Programming with CGIce of craftsmanship in programming, treating rules like 'make non-constant member variables private' as if they were mere matters of stylistic personal choice rather than important lessons that need to be understood.

Given the size of the book, it is not surprising that it barely scratches the surface of Java as it is these days. Essentially, it teaches one only enough to understand their rather uninspiring sample application. One could therefore only recommend it to amateur programmers who want to write simple applets for a personal web site, though it does not even mention any of the potential stumbling blocks that current browser technology places in the way.

This is not a seriously bad book, just a mediocre one. (The aforementioned Java in a Nutshell would make a far better choice of book for a programmer with some experience looking to learn Java.) Not recommended.