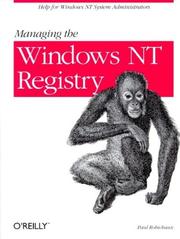 This book is split into roughly three areas: registry introduction/basics, programming with the registry API and registry administration. There is also a closing chapter that attempts to document the standard keys that are found in the NT registry - a nice idea, but a big challenge. There are typically thousands of system keys and so only keys the author knows about or considers important are given. There is a live (and supposedly more up-to-date) database of this information on the web athttp://windows.oreilly.com/registry/, but even this is currently quite sparse.

The book is for NT, but a fair amount should apply to Windows 95. The style of the book is fairly readable, with a good index, although odd jokey footnotes occur throughout.

I did learn quite a bit from this book, but I found parts of it either repetitious or partly duplicated from sections elsewhere - this book is better to dip into for reference rather than read through. The level of detail appeared quite high, but at times appeared silly and unnecessary (examples below) and some genuine technical questions went unanswered.

The introduction to the registry gives a history ('.ini files bad, registry good') and presents the basic root keys and hives. It gives no information on how the registry actually works in terms of native file formats and algorithms.

The administration section devotes around thirty pages to creating and using Emergency Repair Disks (ERDs) and to backing up and restoring the registry (crucial before you start playing with it). My ERD does not fit onto a single floppy, however, but I could find no advice concerning this problem. Similar-sized chapters follow, discussing RegEdit, RegEdt32 and PolEdit the policy editor, which seemed like too much space (I learned RegEdit long ago in little more than five minutes of experimentation). Indeed, for each product, minute detail is given, right down to how to use the 'View/Split' or 'Window/Arrange Icons' menu options. There is a chapter containing security and user account information and covering the resource kit tools and a final chapter containing some quite handy registry tweaks for setting things from menu speeds to post-crash behaviour.

The programming chapter (about a fifth of the book) documents the registry API and gives example code with equal weight to C (plus a little C++), Perl and Visual Basic. This API reference and C/C++ section does not add that much to Microsoft's online documentation. The C style is somewhat lacking (magic numbers, unnecessary operations). Some of the error checking also fails to help understanding - open keys must be closed, but sometimes they are not and in other places keys that failed to open are closed anyway! (The consequences of which are not given.) The best part is a C++ class that wraps up part of the API, although navigating the registry tree is such an obvious case for a class wrapper that C++ developers would have likely written something similar themselves (well, I had 8-)). The Perl and VB examples are handy (although not complete), as Microsoft's documentation is C only.

In summary, this book contains quite a lot of useful information and probably most of what you will need to handle the registry using Microsoft's administration tools, although I did not think the programming section added as much value as it should have.