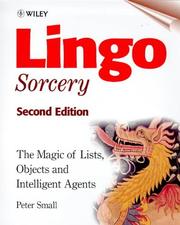 Lingo sorcery - the magic of lists, objects, and intelligent agents

This book is subtitled 'The magic of lists, objects and intelligent agents' so I expected it to be about these topics in general, 'lingo' being slang for language and 'intelligent agents' being to do with tuple space. However, 'lingo' is also the language of Macromedia Director, which judging by the screenshots is an animation and multimedia presentation program running on Apple computers. Familiarity with this software is assumed and the book endeavours to explain object-orientation in this context. Its accuracy would be better reviewed by someone familiar with Director (would anyone like to?).

I was curious about the title's mention of 'intelligent agents' - if they're not the ones that use tuple space then what are they? Since there was no mention of them in the contents, I tried the index and found one passing mention near the end of the book. This means either the title is misleading or the index is poor.

I find it alarming that one of the final chapters advocates replacing HTML-based Web browsers with Macromedia Director viewers. I fear that this may be the way the Web will go even if Director itself is not involved. It will make it totally inaccessible to search engines, blind and partially sighted people, the Third World, backward offices, embedded systems, speech gadgets and generally anyone whom the web designers didn't think of. While there are cases where a Director client will be useful, completely replacing HTML with it would be a shame.