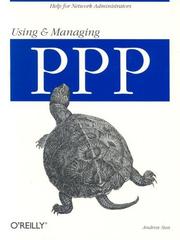 PPP is a key protocol used to support the Internet, however this book is not intended for the average home-surfer, nor is it intended for programmers writing an implementation of PPP: it is aimed squarely at network administrators.

Although many dial-in servers are Unix based, most of the clients will be running Windows. Most of the examples given assume Linux is being used, but detailed coverage is also given to Solaris and to Microsoft's range of GUIs (including Windows 98).

The detailed, low-level description of PPP is invaluable when debugging links. Various non-standard Microsoft extensions to PPP are described. Almost all of the examples assume TCP/IP is being used - other protocols (e.g. IPX) are hardly mentioned at all. Some key protocols commonly used with PPP links - including DNS, RIP, DHCP and ARP - are described briefly.

Although most PPP links today will use dial-up telephone lines, there are also details for using PPP with ISDN, frame-relay, ATM and even direct serial cable connections.

Novice network administrators with a PPP link carrying TCP/IP will find this book invaluable. However, as their experience grows, they will not find themselves reaching for this book frequently.