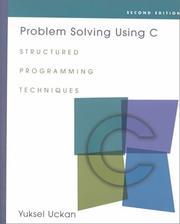 Superficially this is an adequate student text introducing programming through C. The author has a good understanding of C though I wish he were less keen on using such library functions as scanf(). There are numerous other places where he lacks the precision that is desirable. For example when he introduces (far too early in my opinion) gets() he states that the input string must not exceed the string variables declared length. A little thought will show that almost every student will understand this in a way that will generate a one beyond the end problem - you need a space for a nul-terminator.

I could go into great detail about the minor failings of this book. I won't, because it is all swallowed up be a single false premise: the author assumes that C is a suitable language for introducing programming to students. It might have been, and in a few specialist areas (largely engineering) it might still be the language of choice but for a general undergraduate computer-programming course it is quite inappropriate. Java, C++ (in the form that Kevlin Henney calls 3rd generation C++) or Modula 3 are all far superior as choices for a student's first language. If they later learn C, this book would be wrong because the student would already know most of the programming rather than language specific material. There would be much unnecessary material and the pace would be far too slow.

I hope educators will not be encouraged to use C as a first language because they come across a book like this one. It is the wrong tool for the wrong job.