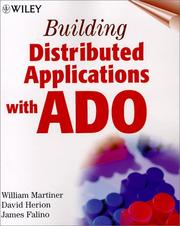 ...for VB developers looking to know more about building distributed ADO applications then this book provides a useful starting point.

This book provides a concise, information packed tour of ADO (Active Database Objects), which is Microsoft's new(ish) database technology to replace the DAO. This is also coupled with an introduction to Microsoft's complementary technology of MTS (Microsoft Transaction Server) and MSMQ (Microsoft Message Queue Server). If you want to see other similar or competing technologies then this is not the book - as per the title it is devoted to Microsoft's tools.

The book is well laid out in terms of:

You can expect the book to cover everything you need to know to start to develop distributed applications with ADO, although it is assumed (largely) that you are familiar with database concepts and deployment of applications as these are not covered. The most coverage is reserved for ADO itself with chapters devoted to the basics, using record sets and ADOX (mechanism for accessing a database's metadata). This is then followed up with an introduction to MTS and MSMQ and the final part of the book is devoted to developing an example order entry system.

The code is aimed at Visual Basic developers and not C/C++ (Visual C++...) developers. For those VB developers it forms a very useful tour of building distributed ADO applications. The level of explanation is good and the ideas are clearly explained. Knowledge of patterns, although used in the example application, is not required as the limited use is well explained and so the reader should be able to follow the example development easily. In summary for VB developers looking to know more about building distributed ADO applications then this book provides a useful starting point.