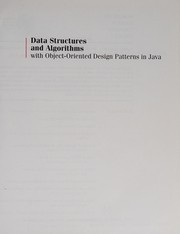 Data Structures and Algorithms with Object-Oriented Design Patterns in Java

This is a student text for a Computer Science course, rather than a reference book for the general programmer. As such, it is clearly written and organised and could be recommended to anyone wanting to learn the topic from first principles.

For the professional Java programmer it has a number of flaws, however. Firstly, it fails to mention the Java Collection classes or any other similar libraries such ObjectSpace JGL. Secondly there is an understandable emphasis on theory - time being precious, the practising programmer is usually more interested in having a choice of working algorithms with indications of how each performs in terms of speed versus memory overhead, thanwading through proofs of how the performance figures are derived. Thirdly, there is no coverage of threads, despite thread-safety being one of the most important issues when choosing a data structure or algorithm implementation in Java.

Not a bad book, then, but not recommended for ACCU members.