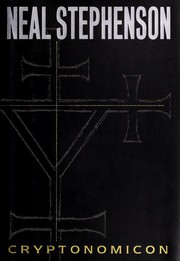 for an all round good read and, for most of us, a chance to learn something into the bargain, this book is hard to beat.

I have not seen a novel reviewed in these pages before, but this one seems worthy of bringing to a wider audience, and I feel that the readership of C Vu might be a good target.

Cryptonomicon concerns itself with two principal timelines; the first is the Second World War from just prior to Pearl Harbour, and the second is the present day. In the historical strand, various fictional and real characters (principally Alan Turing) are involved in the code-breaking effort at Bletchley Park and elsewhere. For those interested in the mechanics of the Enigma machine, the novel contains by far the best explanation of its working that I have read. As it is a novel, the author takes many liberties, and we are introduced to two fictional cryptologists and friends of Turing - Rudy von Hacklbacker and Lawrence Pritchard Waterhouse. Early designs of the digital computer are ascribed to Waterhouse, including an extraordinary type of RAM using organ pipes.

While much, if not most, of the literature surrounding Enigma and WWII code-breaking rightly concerns the phenomenal intellectual and physical effort that went into determining the enemy's plans, "Cryptonomicon" looks at the corresponding requirement to keep the Allies' knowledge secret. Plainly, the Allies could not simply act on every datum that they received, because the Germans (and the Japanese as well) would soon have realised that their cyphers were compromised, so Department 2702 (at one time 2701 until Waterhouse pointed out that this was a product of two primes, a fact likely to cause suspicion amongst German codebreakers) was set up to provide a number of smokescreens and flanking manoeuvres. Dr. Alan Turing is also a member of 2702, and he explains the unit's strange workings to Waterhouse.

"When we want to sink a convoy, we send out an observation plane first... Of course, to observe is not its real duty - we already know exactly where the convoy is. Its real duty is to be observed.... Then, when we come round and sink them, the Germans will not find it suspicious.

One of Department 2702's main active personnel is a Marine Raider called Bobby Shaftoe, a gung-ho type who fathers a child on a Filipino called Glory on the night the Japanese attacked Pearl Harbour.

Cut to the present day. Waterhouse's grandson Randall is a Unix hacker and shareholder in Epiphyte(2) Corp. He, along with the other main characters in the modern-day storyline are high-tech entrepreneurs organizing a start-up company to build a data haven and issue a digital currency (to quote from the author's own FAQ - see below). Not surprisingly this idea is not without enemies, including the mega-rich "The Dentist" and various US State Departments. During the preliminary work Waterhouse runs across America (Amy) Shaftoe, the grand-daughter of Bobby, who works with her father Douglas MacArthur Shaftoe as a diver laying the cables necessary for the data haven.

At the centre of the novel is a secret left over from the war, and clues and echoes are scattered throughout the book alluding to it. Along the way we are treated to a number of disquisitions on Unix, cryptology (the twin arts of cryptography and cryptanalysis), the hacker culture (he is one of the few authors who recognises the difference between a hacker and a cracker), as well as some great set pieces from WWII and the present day (including a terrific sequence where some shady US G-men types are trying to get their hands on a web-server, and how the good guys won the day). The author alternates the various strands chapter by chapter, which in other, less capable hands, can be a severe irritant. Here it works beautifully.

Stephenson is a brilliant writer (as anyone who has read Snow Crash or The Diamond Ice may testify) and my feeling, as a wannabe-Unix hacker and crypto-ignoramus, is that he knows his stuff. Amongst the fiction there is a munitions-strength encryption system designed by Bruce Schneier, author of Applied Cryptography (there is an Appendix written by him which gives the book extra gravitas) and a Perl script that encrypts and decrypts using the same algorithm. The book is, of course, fiction, so wizards and gurus will probably find much to irritate them, and as well the Perl script contains an unfortunate typo which means that it doesn't work (for a correction see the FAQ), but for an all round good read and, for most of us, a chance to learn something into the bargain, this book is hard to beat.

For more information Neal Stephenson has a FAQ at:http://www.well.com/user/neal/cypherFAQ.html

The Solitaire encryption algorithm is at:http://www.counterpane.com/solitaire.html