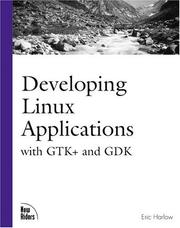 This book is aimed at people who want to develop GUI applications under Linux. The author claims to assume familiarity with C, developing GUI applications and event-based messaging; this seems fairly accurate, although I don't think you'd need very much familiarity with the last two to cope. The book covers some of the features of GLIB (one of GTK+'s supporting libraries), the most common GTK+ widgets and some more advanced topics such as the use of GDK.

Although the features of GTK+ covered are introduced by descriptive text with accompanying code fragments, a major feature of the book is the inclusion of complete example programs, which demonstrate the use of features in (reasonably) realistic applications. These programs are accompanied by some text describing their main points, but it's not uncommon to have several pages of uninterrupted code which need to be studied. This approach works fairly well, but does lead to a lot of the book being taken up with code listings. All the code can be downloaded from the web.

There are a few minor typos in some of the printed code but I didn't notice any major problems. The example applications are also a bit rough in places, but as they're only examples this is acceptable (and perhaps desirable, as it reduces their complexity).

I think this book provides a good introduction to GTK+ and GDK, but I get the impression there's a lot of material left uncovered. If you accept that you'll need to look elsewhere for further information, it's worth considering.