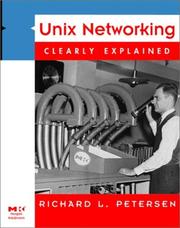 'Don't judge a book by its cover', they say. Nor I suppose should one judge a book by its title; but the cover of this one is a give-away. It shows what might appear to be railway worker operating an apparatus made up of large pipes! It is in black and white and judging by the appearance of the operator I would say that it is circa 1950s or 1960s.

This impression is quite in keeping with the material within. It is little more modern than the machinery illustrated. As for the title it might have been more accurate to say: 'Unix Bits and Pieces', or 'Sections from Other Unix Books'. I am sorry to be so scathing, but the efforts of Mr Pedersen in this instance add very little to the existing literature in this area, which is voluminous.

I would have expected such a book to give me some insight into networking essentials; how does one get a network established? Nowadays networking invariably means TCP/IP, but Petersen devotes a mere 16 pages to this. (Another 7 to remote login operations.) Nor does he distinguish between the numerous variants of Unix out there and the networking peculiarities of each. Sendmail is not mentioned, nor is mmdf (essential to the understanding of Unix mail). Linux too is omitted, as is any mention of GNU or the free Berkley Unix. Far too much attention is paid to legacy news and mail readers, ftp, uucp and telnet.

In short, although the text is clear, I find this book dated and not worth the money.