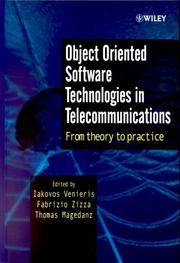 Object Oriented Software Technologies in Telecommunications - From Theory to Practice

The list of contributors to this book lead one to have high expectations for this book that it fails to live up to. The title and preface suggest it is a study of current telecommunication technology and the part OO could play in developing the new services and technologies demanded in an increasingly rapidly changing industry sector. This it fails to do, ignoring a number of key areas, such as SDH (Synchronous Digital Hierarchy), playing down the importance of the current infrastructure, such as circuit switch networks and glosses over key requirements of the telecommunication network such as high availability and high reliability. It also fails to recognise the significance of the vast investment in existing equipment that the incumbent operators are not about to throw out and that has to workwith and alongside new technologies and services. However, treated as a theoretical text concentrating on some popular emerging technologies and assuming that telecommunication networks can be built from scratch or displace existing infrastructure, then it contains plenty of information, although it is likely to become dated quickly as the market fails to follow predictions and large former national operators inhibit the rapid introduction of broadband services.

The book is split into three parts. Part I and II provide an introduction to telecommunication networks and software engineering techniques discussed later in the book. These contain useful information but not in an easily digestible form and as they only cover material required for the third and final part, are insufficient for a broader understanding of the technologies. Part III is a case study of a Distributed Intelligent Broadband Network. This seems to be more an academic exercise rather than a real world example, its object-oriented content limited to a few UML diagrams and the telecommunication element no longer valid as the technologies have developed in a very different way since the material was written.

The book overall is only really of use as an academic paper and it is priced so high as to be unattractive to most students studying in this area.