REVIEW - Ultimate Zero and One - Computing at the Quantum Frontier 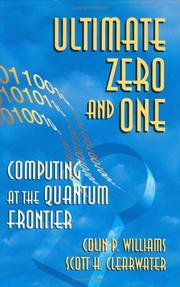 Ultimate Zero and One - Computing at the Quantum Frontier

Ultimate Zero and One should be digestible by any intelligent reader

Disclaimer: the reviewer has communicated with one of the co-authors (Colin P. Williams) and an editor of a book not reviewed here (Artur Ekert).

One unexpected delightful problem I had when starting the process of reviewing quantum information processing (QIP) books was that more books on the topic were popping up. Before exhausting them all, I am writing now about three of them.

The two Springer-Verlag books are aimed at people who are not necessarily specialists involved in the field. This is especially true of Ultimate Zero and One , which should be digestible by any intelligent reader who also won't shy away from some mathematical notation. None of the books stick solely to the physics responsible for the fundamental advantages over traditional techniques. Dr. Michael Brooks unfortunately did not insert a chapter on plain computability and complexity theory but insightful essays on funding and political issues make one think.

Ultimate Zero and One 's splendid coverage of good old computer theory may understandably bore a number of people with a firm computer science education. Not to worry, as sections familiar to the reader (e.g. what a Turing machine is for programmers, or the properties of a superposition of states for quantum physicists) can be skipped to reach intriguing material. The slender Quantum computing and communications could have benefited with extra words from a numerical methods angle, but should still be graspable as is with a microscopic engineering bias.

These two books I have spoken most about so far are the ones most easily labelled as popular science titles, though I may feel somewhat reserved to allow them to be branded as so general or trivial. Another big difference between these and the serious Pittenger offering is that they have a broad swathe on quantum information processing.

Cryptographic key distribution is not at all mentioned in An Introduction to Quantum Computing Algorithms and as can be picked up from the title, Pittenger is pretty much leaving the constructs around candidate particles out of the picture.

This is not to say he ignores logic gates. These are not dealt with in full; the reader is left to explore the referenced papers.

The book is a serious hand-holding through the basic original constancy; unstructured searching and factorisation algorithms of David Deutsch and Richard Jozsa; Lov K. Grover and Peter Shor (thanks to Dan Simon) respectively and some of the following later optimisations; variants; and adaptations (though not all, e.g. strictly one search item is all that's walked through in the book). Mathematical literacy is an intended prerequisite. A quantum mechanical former life may not be essential but (former) exposure to vectors (as in matrices, you at the back stop reaching for C++ vector) would be advised. The final fourth chapter is on quantum error-correcting codes but in no way is intended to be all encompassing.

Recall that in my report in the January 2000 issue of C Vu of a blackboard demonstration of factoring the number four at an event thanks to the Quantum Information Processing Device using Doped Fullerenes project, a mathematics lecturer followed it all 'except the quantum'. In the book, Arthur O. Pittenger factorises the number fifteen in his example. Then he goes on to show the general case. Pittenger's book may not necessarily be so desirable to those established experienced mathematicians and physicists who would most be at ease with it, since they could consult omission-free papers. People out of the loop who wish to have access to the papers could try the compilation from Springer-Verlag assembled by Bouwmeester, Artur Ekert and Anton Zeilinger ( The Physics of Quantum Information, 3-540-66778-4), which at the time of writing I have not seen.

The Birkh user book may fill one niche for students who want a shop-bought alternative to tutorials onhttp://www.qubit.org/. Ultimate Zero and One , Colin P. William's and Scott H. Clearwater's second QIP book (their first being Explorations in Quantum Computing , Springer-Telos, 1998, 0 3879 4768 X) is typically an ideal comprehensive first book. Masters students, programmers and laymen alike would find it a fine companion. Not reviewed in this three book bonanza, Introduction to Quantum Computation and Information , World Scientific Publishing, (pb: 9 8102 4410 X, hc: 9 8102 3399 X), 348pp, edited by Hewlett-Packard staff Hoi-Kwong Lo and Tim Spiller and Sandu Popescu, which I am about forty percent through at time of writing has been proving to me to be a good, somewhat more advanced and mathematical treatment of affairs than Ultimate Zero and One . This HP book lacks an index however. The book edited by Brooks would, for a layman, best follow one or two decent articles. For a physicist, it is handy to find out which companies are already players. Some of its authors seem at pains to stress European involvement. Yet almost casually mentioned apparently minor Japanese involvement was not lamented as a loss for Japan.

Another difference between Arthur O. Pittenger's writings and those in the other two books (and the World Scientific Publishing book) is they do not contain a single spelling or grammatical mistake. In contrast these other three books have various levels in the order of ten per cent of pages. These are not serious - a missing vowel or a singular instead of a plural, etc. still intelligible-except for page 39 of Ultimate Zero and One , where 1XOR0 should be equal to one (serious to a layman/physicist). I am yet to finish the HP book, but that is the only error so far in the four books which changed a meaning to something false, or changed semantics at all. However, at least Williams and Clearwater give plenty of references.

As I said, more books are popping up, e.g. Minds, Machines and the Multiverse: the Quest for a Quantum Computer by Julian Brown, Simon& Schuster, (0 6848 1481 1) and a Cambridge University Press book by Neilsen& Chuang as mentioned in a mailout from the Real Time Club (http://WWW.RealTimeClub.org.UK/). It was pleasing to see the ' NMR Quantum Computing ' talk given by Dr. Jonathan A. Jones in Dublin in October 1998 appear in Quantum Computing and Communications , but only its presentation in September 1998 in Helsinki is mentioned in the book. If you will excuse me, I have to catch a train to a QC conference in Villa Olmo, Italy.