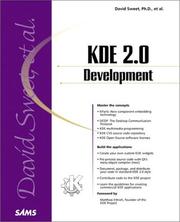 The book really does serve as a very good introduction to KDE2 programming.

The KDE2 project is a second-generation Unix desktop environment. The KDE 1.x versions were released to much acclaim and the new KDE2 versions are much more polished. KDE provides a really pleasant user interface, with a technically impressive and very easy to use C++ oriented programmer interface. It is an open source project, free in every sense.

The book is a complete introduction to developing programs under KDE2. It is aimed at programmers who are already proficient at C++ and doesn't try to be a C++ primer.

I first came across the book on the Internet when it was initially announced; it is one of the rapidly growing collection of books published under the open source license. This means that you can download and view it for free. However useful the downloadable version is, it simply does not take the place of a printed copy!

The book really does serve as a very good introduction to KDE2 programming. It is clearly laid out and well thought through. It is the work of several contributing authors (usually the expert in the particular field being described). In spite of this it does have a cohesive structure.

It's not perfect though, for example, the very first coding example misses a brace. Some of the authors write more readably than others (note that not all authors have English as their first language). No part of the book is downright unreadable, though. It's worth noting that since the book is open source any technical errors will be rapidly corrected.

Many different topics are covered (this is symptomatic of KDE2 it does so much). Not every topic is covered in thorough detail; the book largely provides a sound introduction. From this grounding the reader is perfectly able to go and find out more as (and if) necessary. It interesting to see how many references to documentation on the Internet is made.

In comparison to the KDE 1.x development book (by Uwe Thiem) this is far superior. Not to denigrate Uwe's work, but this book contains much richer and more thorough content, crisper styling and thanks to its authors comes with a greater authority.

I have no hesitation in recommending this book to anyone who needs to get up to speed with KDE2 development.