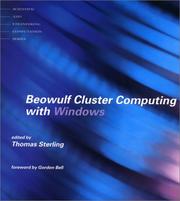 What is a Beowulf Cluster? Basically it is a number of PCs (Intel or equivalent, such as AMD) connected by a LAN such as Ethernet together with the software that allows such a cluster to perform as a parallel processing computer. The idea is not new (I had a student who programmed the schools 16-station network to work as a single machine back in about 1986) but it was not until the mid 90's that the idea was realised in a more general form so that the user did not need a special understanding to get real work from a cluster. The first cluster was built from 486-based machines running Linux circa 1994. The idea has developed with improvements in the software and diversification so that clusters do not need to be homogeneous in hardware nodes and you now have the option of building a Beowulf Cluster running on machines using Windows 2000. There are significant differences between Linux and Windows 2000 Beowulf Clusters, which is why there are two books. I have to confess that I am a little puzzled as to why anyone would want to build a Windows 2000 based Beowulf Cluster given that Linux has a reputation for running more efficiently. I would be interested to see how the two match up. Of course Linux clusters are significantly cheaper because the operating system is cheaper. If you wonder as to how powerful these machines can be, have a look at

- I think you may be amazed.

You can, I hope, understand why I am not going to go into great detail with the rest of this review. The books are divided into three sections. The first title 'Enabling Technologies' deals with everything from a little history through to setting up a cluster including installation and configuration. The second part, titled 'Parallel Programming' deals with issues concerning software that will run on a cluster. Yes, it starts with the classic 'Hello World' program. If you want to get some idea as to how this area of programming is developing it this is a good introduction. Of course an ambitious reader might be inspired to collect a dozen or so retired machines and build their own Beowulf Cluster.

The third part of this book is about managing a Beowulf Cluster once you have one installed and running.

If a group of students wanted to develop their understanding of this area of computing I think building a small Beowulf Cluster would make an excellent project. I think I would choose the Linux based option. This book would guide you in the process though you would have to get all the relevant software. If an ACCU member comes forward with a serious proposal to manage such a project I will happily donate the relevant book to them on the understanding that we get reports on progress.Other Computer Uses