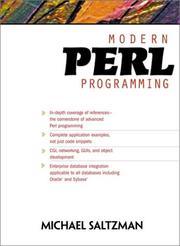 This is a good, considered introduction to Perl programming. Presented in a tutorial style, it has clearly been thought through carefully, well arranged and laid out sensitively.

It begins with a well-paced introduction to the language in chapters 1-7. This is not the most suitable introduction for a new programmer, but if you already know a programming language reasonably well it is pitched at the right level. There is no time wasted by labouring points, but everything is explained clearly and in sufficient detail.

In line with the book's title, Perl references and object-oriented programming in Perl are given good coverage. The OO section will only really make much sense to those who already understand the principles, but with this foundation it is a clear description.

Other 'advanced' topics covered include network programming, writing CGI scripts, GUI work, database interfacing and a crucial chapter on Perl debugging. None of these chapters will make you an expert in their field, however they are each a good introduction to get you up to speed.

The one real downside to this book is inherent in Perl itself; the language is so large and has such a bewildering array of built-in functions and extension modules that it's difficult to cover them all in a tutorial-style book and this book doesn't. When you get into some serious Perl programming you'll want to stray outside of the scope of the text. That's inevitable.

So we haven't replaced the Camel book here. The real shame, though, is that the book doesn't provide any further routes into information available. Clear pointers to other books, www.perl.com and www.perldoc.com would be invaluable and most definitely a description of perldoc (and how to use it) should be mandatory. It would also be helpful to have a section providing a quick overview of some of the commonly used Perl modules, so the reader could get a flavour of which wheels have already been invented.

That said, this is still a recommended book, take a look if you're about to step out in Perl development.