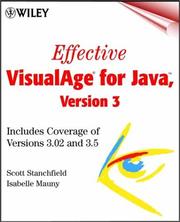 Effective VisualAge for Java, Version 3 - Includes Coverage of Versions 3.02 and 3.5

In many cases the content of the typical enclosed CD feels at best half-hearted, e.g. some source code and a couple of trial versions for more or less title relevant software, limited either in functionality or in time scope. On this title's CD a complete fully functional copy of IBM VisualAge for Java professional edition 3.5 is supplied. This vastly enhances the value of the book/CD-set, but only if you have computer powerful enough.

VisualAge for Java (VAJ for short) is extremely memory and processor hungry software. To run its internal test environment 128MB RAM isn't enough. I installed the kit on a PIII 600 MHz 256MB RAM. I consider this as a minimum. Happily enough it doesn't requires Windows NT or 2000, but runs well on Windows 98 OS. So don't try to install (or buy at the first step) if you can't afford this power at home or at work.

After installation this title will guide you through a vast development environment for Java. Surprisingly enough, it is at the same time well suited for reading through. Of course with some breaks practising at the computer. Much effort is made to explain the philosophy behind VAJ. Files and keystrokes farewell, the brave new VAJ repository and dialogue world welcome. A lot of focus is around development of Java beans (not to confuse with Enterprise Java Beans) and AWT/Swing components by using Wizards.

Naturally, this kind of component development is well suited for tools like this. I think readers used to Microsoft Visual Studio will soon get a familiar feeling. If they are used to Emacs or other advanced editors on the other hand, the use of VAJ will feel very awkward. At least at the beginning. Using VAJ is as far from the command prompt as you can get without leaving the computer.

There is also a good chapter explaining the version control built into VAJ. A not very intuitive feature to use. A powerful part of VAJ, the support for distributed applications like Corba and RMI, is covered in their own chapters. An RMI registry is built into the environment to make testing easier. All this is well explained. There is even a good introduction to servlets and HTTP. The text is primary version 3.2 based, but also covers version 3.5.

A drawback is the chapter about developing Enterprise Java Beans components. It is best described as a lightweight introduction. In common perception I believe IBM's VisualAge is heavily associated to that powerful J2EE-component, but the professional edition doesn't support it when it comes to fact. It is bad that it isn't mentioned earlier.

Another drawback is a too small index. 14 pages for more than 900 pages and 25 chapters makes it almost useless.

At the same time as reading this title I have been developing Enterprise Java Beans in a VAJ-project. We use VisualAge Enterprise edition 3.5 (VAJ Professional edition + support for EJB and project management) and I have got many fine tips and hints. To be short, it has been of value for me as a professional.

I also see another potential group of users. It is very easy to build and run/debug applications, applets and servlets in VAJ. It makes it great to buy this title for the Java apprentice. At the same time as learning Java, he/she is getting used to an industrial development environment. Recommended.