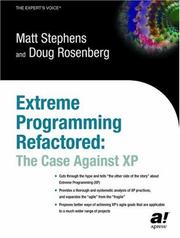 This book takes a long hard and completely irreverent look at the Extreme Programming methodology. I guess that it is going to cause some people to spit blood and others to dismiss it as bad technical writing but for this reviewer it is a long need breath of fresh air.

The authors' style incorporates satire, song writing, industry experience, as well as a solid analysis of the elements of XP. The writing style makes it easy to read and the analysis and experience make it worth reading.

XP is a particularly rigid example of Agile programming methodologies that was designed by Kent Beck. When he presented it in eXtreme Programming Explained (ISBN 0 201 61641 6) he was very firm that all the various elements were essential and must not be messed around with. Perhaps more significant is that the book was published in late 1999 (and largely written in the preceding two years) and the seminal project was the Chrysler Comprehensive Compensation or C3 project to develop a new payroll system to replace the existing one which was expected to have Y2K problems. The project was started in 1996 and had a clear absolute deadline of 1/1/2000. In fact the project was cancelled in 2000 having never handled more than a third of the Chrysler payroll.

I think that Kent Beck's original book was worth reading and certainly extended the range of possible discourse on programming methodologies. However it has never seemed like a silver bullet and initially masked the more general view of Agile methodologies.

One of the interesting things about this book is that it isn't simply a diatribe against XP practices but does take Kent Beck's work seriously if only to disagree with much of it. The early chapters take the various principles of XP and hold them up to the light so that we can better see the holes and faults in them.

In chapter 14 the authors tackle one of the major problems with XP, it simply does not scale. Actually I note looking back at my review of eXtreme Programming Explained that I did not think it would (interestingly the C3 project was larger than my estimate of where XP would work though I was unaware of that at the time).

In the final chapter (15) the authors carry out the process of refactoring XP by seeking to extract the good ideas from the monolithic process that Kent Beck described. While I would not agree with everything I find there, I do think that their 'defanged XP' recovers a good deal of the agility that I expect from an Agile methodology.

If you are interested in the software development process and are happy with technical writing that leans on satire to make its points then this is a book you will both enjoy reading and benefit from having done so.