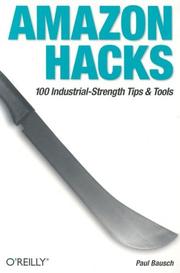 I am not going to review these books in any detail because they arrived on my desk as a result of O'Reilly's policy of sending me everything they publish and leaving it to me to decide what to review. (At least that way I do not miss anything important).

These three books share the qualifying subtitle '100 Industrial Strength Tips and Tools'. Does anyone else feel that there is something odd about a book on Windows XP sharing such a qualification with Amazon and eBay? My feelings is that the authors of the latter two books were really stretching to meet the series qualification, whilst the author of the first must have been badly pushed to decide what to leave out.

I think that the use of the 'Hack' in the title is significant. Each book assumes a considerable level of computer expertise from the reader and I would not want to hand these books to an enthusiastic novice who would promptly get their system into a tangled mess.

I have to confess that I am far from happy at the steady conversion of Amazon into the default merchant on the Internet. I remain of the opinion that in the long run dominance of this aspect of the Internet by a single company is as bad for users as is the dominance of the desktop by Microsoft. We need competition. Look how much better things became when Intel got a serious competitor in AMD and how much harder Microsoft works now that Linux is beginning to look like a product that can be used by the ordinary, non-technical, user. Of course this has little to do with 'Amazon Hacks'.

Perhaps another shared property of these three books is that each is about a product that wants to rule its corner of the IT world. Think about it. In the meantime if you really use Amazon and eBay a lot then the books on these are possibly worth the price. In the case of The book on XP, I have nothing against it as such but I would first buy 'Windows XP Annoyances' from the same publisher.