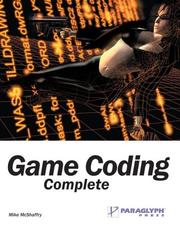 well presented and contains a lot of helpful information on getting the most out of a game code.

Ever wanted to know how to write a game, the processes behind it, the planning and just about anything else you could need to know? Then this is the book for you. Unless you're not interested in Win32 and DirectX that is, in which case, it's still a great book - you just can't run the software.

The author is one of the team behind the Ultima series of games and has been on the series since the start, so should know a thing or two about what goes on behind a game.

This book is well presented and contains a lot of helpful information on getting the most out of a game code. It is refreshing in today's environment of bloat acceptance and games needing the highest spec'd hardware available that the approach taken is for general machines and tight code. The author is to be commended for taking this route.

Too often those using early P3 Windows machines/late P2 machines (or even those with moderately high spec Linux boxes and run WineX to play games on) are left out due to someone deciding early on that the game will only run at a high bit-depth resolution, with 256Mb memory and the latest nVidia graphics card and Soundblaster technology (some of which may not be currently available to the general public).

Another refreshing approach is in the actual writing style - it is very down to earth and treats the reader more as a friend than anything. You could actually imagine part of it taking place down the local pub on backs of envelopes! It is yet another reason to get the book that even with this style, it is informative.

Where the book does fall down on is that it doesn't cover in any depth the use of extra applications used in modern game development (such as 3D Studio Max and sound software). I can understand why the author has done this - it would increase the page count from a respectable 563 pages to something approaching the OED or would have to be seriously hacked down in order forthe page count to be something sensible. Highly recommended.