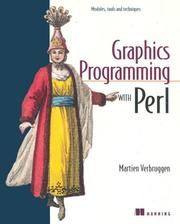 Using the example code from this text one can pull data down from the Web and display it graphically with ease.

At first sight, one would not associate Perl with graphics programming. Perl is a 'glue' language, extraordinarily useful for text processing, but it is text progressing ability that has equipped Perl so effectively for the web revolution. The web revolution in turn has demanded graphics.

When I first noticed the author's name, I was immediately excited. Anyone who has spent as much time as I have lurking around

, could not help but be excited. Martien is one of the more frequent and more articulate contributors to that forum.

Here he has written an excellent book, well written and very clear. It might have a limited readership - not many of us are motivated enough to get to grips with the internals of Gimp, GIF or JPEG file formats, but many more will be interested in the mechanics of displaying data on a simple line graph or histogram.

Using the example code from this text one can pull data down from the Web and display it graphically with ease. It does mean down loading a few modules from CPAN (for example PGPLOT, GD and Image::Magick), but this is relatively straightforward.

My copy lacks colour images, so some of the delicacies of shading are missing (for example water marks). Also the book's web site lacks some of the source examples - but the author assures me that his recent upload should fix this. It had been hoped to produce a full colour electronic version that could be downloaded from the web site at a price (

), but this has proved impractical. Be warned that the electronic version available there lacks cross-links in the table of contents and index.