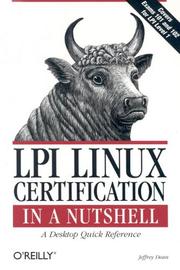 LPI Linux Certification in a Nutshell - A Desktop Quick Reference

This is a gem of a book. For someone wishing to get up to speed on Linux, or wanting to brush up on skills, it might be worth buying, over and above LPI certification. O'Reilly publishes other Nutshell works on Linux, but the exercises at the end of each chapter in this one are particularly useful. It is full of rich little crumbs of knowledge that I've seen nowhere else before. (For example, I had no idea the ! operator was so powerful on the command line.)

Certification is sometimes a contentious issue. In the IT industry opinions are divided as to its usefulness. It is assigned little credence among SCO Unix gurus for example. In the job market, I can see sparse demand for it, with the exception of the Microsoft variations. It has a place in that world, perhaps, as a means of sifting the varied, voluminous and often suspect levels of expertise.

Typical of fragmented Linux/Unix there are too many suppliers and too many certifications available. Which one will win out in the long run will be determined by the commercial success of its sponsoring company. Red Hat offer two. SCO/Caldera several (if the Unix qualifications are included), but this is likely to stabilise now with SCO becoming involved in United Linux and in turn with LPI.

The Linux Professional Institute offer a certification that is independent of any particular proprietary Linux. (In keeping with this Dean covers material on both the Red Hat and Debian package management: rpms and apt/dpkg.) The idea being, partially, to reduce confusion on the part of employees and candidates alike. Only time will tell if the venture has been a success. I have no figures on the uptake. Those interested might like to have a look at

One can pursue certification for reasons other than seeking employment. One can pursue it for fun and over the next six months or so, that is my objective. In doing so, Jeffrey Dean's book will play a large part in my efforts.

Production is in keeping with the high standards we've come to expect from this publishing stable, although I did find the odd bum steer amongst the illustrative figures and worked examples. If anything this adds to the thrill. It is easy to check a text like this with a keyboard and working Linux system on the same workspace. It really is fun.