REVIEW - C# and the .NET Platform 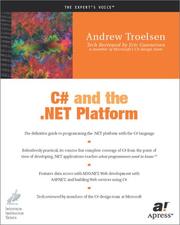 C# and the .NET Platform

This thick book has 900 pages and is designed to bring existing VB, C, C++ and Java programmers up to speed on C# and the whole .net platform, as indicated by the title.

It begins, as seems to be common with books on this subject, by describing the philosophy of .NET. Chapter 1 contains a basic introduction and the whys and wherefores of .net. In order to justify the existence of C# and .NET, the author seems to be trying to find something wrong with every other language. For example, he says that 'Programming with C++ remains a difficult and error-prone experience', although the only problem he could find with COM is 'very complex'.

Since the readers of this book are expected to be programmers already, chapter 2 runs very quickly over the core language and the C# fundamentals such as Objects, data types, the difference between value and reference types, UDTs, overriding methods, looping and flow control constructs, operators, basically all the core C# language.

In chapter 3 we meet the Object-Oriented features of the language, i.e., class-related stuff like inheritance and support for polymorphism. Comparisons are made with C++, Java and VB, which is helpful, although if you are an experienced OO programmer you won't need the description of the 'Pillars' of OO - Encapsulation, Inheritance and Polymorphism. The next couple of chapters build on this and introduce more of the object-oriented features.

Following these the book moves on to .NET features, describing assemblies and attributes, then a few chapters on windows rather than plain 'console' features. The book refers to Visual Studio and other tools where appropriate but also tells you how to code Windows forms, for example, by hand.

Finally the book describes some optional parts of C# programming, with chapters such as 'Interacting with unmanaged code', 'Data access', 'Web development' and 'Building web services'.

The reviewed copy sported a flash on the cover stating it was for Beta 2 of .NET, although the illustration of the book on the publisher's web site showed no sign of this, as one would expect them to have updated it by now. Source code for the examples in the book is also available from the web site.

Generally this book was very easy to read, with a friendly style that came across well. I reviewed it at the same time as Wrox 'Professional C#' and would add that this book is easier to handle, at 'only' 970 pages. The examples in this book are necessarily trivial, as with most programming tutorials and at times a bit silly ('Bitmaps as brushes! Way cool...'), but generally they illustrate the point being made.