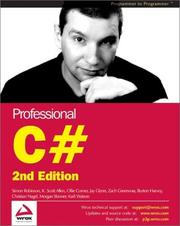 I reviewed by Andrew Troelson. That book has nearly 1000 pages, but this one takes the prize with a weighty 1233 pages. In contrast to that book though and in common with most Wrox books, this book has multiple authors: in fact it has 14. So it's not difficult to see how they came up with so many pages.

It begins like most C# books seem to, describing the architecture and rationale behind C# and .net. Unlike Troelson's book they don't seem to think they have to find shortcomings of all the other main languages out there in order to justify C#.

The book moves on to describe most features on C#. It starts, as is usual, with an analysis of the 'Hello World' program. Following that come all the usual things like types, control structures, console I/O and also includes XML documentation at this early stage, which I feel is good as it makes the programmer think about documenting the software!

Next comes OO stuff (as it relates to C#, not generally) including classes/structs (and the differences), inheritance and interfaces, method overriding, constructors and destructors, properties etc.

All this has appropriate comparisons with C++ where necessary.

The next chapter finishes off the general C# part of the book with what they consider to be 'advanced C#' including exceptions, delegates and events, user defined casts, the preprocessor and such like.

After this the book moves on to more general .NET stuff plus various extras usable from C#. It begins with the .net base classes, which are cross-language, then we encounter the first chapter that relies on Visual Studio .NET (the previous ones used the plain SDK) showing how to develop windows apps in C#, including custom controls.

Following these chapters we learn about web services, SOAP and remoting (like Java RMI).

Really this book has it all. It is easy to read, despite being written by about 14 different authors and just about everything seems to be here. It is not organised as a reference though, but a tutorial and I would have preferred that, if a book is going to have this many pages, that some of them could be used to include some material in reference format. As it is the only real criticism I have is the sheer size of the book, which makes it physically more difficult to read.