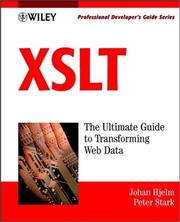 While the authors clearly know their subject, unfortunately the layout and print editing is so poor that I cannot recommend this book. The technical details are in the book; you just can't find them.

This book is aimed at the professional programmer who wants to learn this new technology. The back cover starts with a tautology like the sub-title and goes on to extol the virtues of this book as having 'numerous clear examples', numerous perhaps, but not clear.

Most of the examples are incomplete fragments; the exceptions are the 'complete' examples towards the end of the book.

There is no 'How To' cross-reference or index of examples, which is a must for XSLT because it is not an ordinary procedural language, but neither is it declarative nor functional. So once the beginner has read the book and wants to come back for more details, one could spend hours looking for the solution to a problem, like 'how do I change the value of a variable?' (Answer: you can't, but what you do instead is...)

The companion CD has so little on it (51MB) it was not worth the CD it was printed on! The section in the book devoted to the CD consists of 3 sentences. The first is false; all of the code examples are not on the CD. The second is untrue in relation to the quantity of tools on the CD. The last is nearly true, they are all freeware or demos, but the time-limited tool had already expired and so will not load, nor tell you where to download an upgrade!

The CD does not have an index either in the book nor on the CD, the information on the tools is plain text and without references to where the tools were downloaded from originally nor where to find updates.

The book shows and describes several tools, which are not on the CD, nor are there references to them included in the text, for instance I'd like to know where they got their R380 simulator.

The 12-page index is a mess, the number of typos is large, and the formatting of useful reference material such as function descriptions is poor.

Several examples are so unclear I have taken hours to understand them.

The index doubles as a one-line glossary, but several acronyms used in the body are missing.

For a book which extols the virtues of the separation of content and presentation, this book is a potent example of why this is still an idea in its infancy, as both the book and the CD suffer from the lack of co-ordination that must be rigorously applied to ensure that the automated formatting of data is always correct. Not recommended.