REVIEW - Focus on 2D in Direct3D 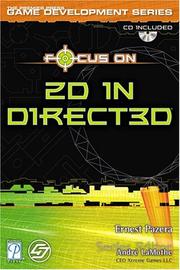 Focus on 2D in Direct3D

The only positive thing I can say about this book is that it doesn't appear to be inaccurate. I found it very difficult to imagine what audience would benefit from reading it. The book is far too limited in its scope, lacking depth, breadth and technical ambition to be of any use to a games programmer, 2D or otherwise; they would be far better served by spending an hour with the relevant DirectX documentation.

The book is written in a verbose first-person vernacular, which I found very irritating. It also contains many useless, poor quality illustrations that cannot but lead me to suspect space filling on the part of the author or editor. Examples include a half page picture of the author's work area (because it is a bitmap loaded by some example code) and a half page illustration of a black screen containing three dots, with the remaining half page taken up with a screenshot of the same three points, but now joined by lines. The illustrations themselves are of such poor quality as to be reminiscent of photocopies and they do not aid the understanding of the accompanying text in any way.

'2D in Direct3D' walks the user through enough Direct3D to allow him/her to begin rendering primitives on screen and covers texturing and alpha blending in the shallowest manner possible. However I think that two or three pages of concise, well documented code would be a better learning aid than this book and indeed the DirectX 8.1 SDK (which is needed to compile the author's code) provides reams of such code. I believe that when code is presented to a young and malleable audience (andsurely this is the only audience who will suffer this book), it should be of the highest standard, within reason and must promote good habits.

In a book supposedly aimed at 'a game programmer and somewhere above the rank of total newbie', it is continuously apologetic for having to use any maths and its treatment of the maths topics it does attempt to cover is terrible. Pages 146 to 148 of the book are just an unreadable expansion of the product of two 4x4 matrices and ditto with matrix addition on pages 144-145. The author should have consulted classic entry level texts covering the same topic, such as the OpenGL 'red book' to see how else it can be done. Or simply omitted the topics altogether and assumed some degree of numeracy on the part of his readership.

Incredibly, the author manages to cover lighting without even mentioning DirectX's lighting formula, which relates the scene's lights to a surface's material to the final rasterised pixel.

I was also very disappointed, although not surprised, by the low quality examples that accompany the book on the CD. Chapter 16 describes its accompanying executable as a 'simulation of rain', however it looks simply like flickering blue lines.

In conclusion, this book has nothing to recommend it to anyone with the mildest experience of 2D programming and I fear it may lead the innocent novice into bad habits and wasted time.