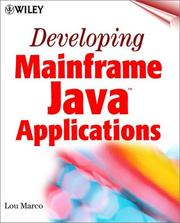 On the whole I would recommend it to someone in its target audience, but there may be better-produced books available.

The book starts out by discussing why a mainframe programmer might want to learn and use Java. In this respect the approach is good; many mainframe programmers that I have met tend to believe that COBOL, PL/I and/or FORTRAN are the only languages worthy of consideration. It then goes on to describe at a fairly high level how Java differs from COBOL and PL/I. This makes quite a good case for the move from traditional mainframe languages to Java.

The next chapter in the book discusses how to obtain a version of the Java SDK and install it on a PC. This is a little surprising since it tends to assume that all mainframe programmers wanting to use Java will have access to a PC - they are very likely to, but it's by no means guaranteed. Java on the mainframe is left until later in the book. The remainder of this and the following chapter discuss creating simple Java programs and using the various tools in the JDK.

The remainder of the 250 pages that constitute the first part of the book provides an introduction to the Java language, Classes and Objects, Encapsulation, Inheritance, Interfaces, Threads, Exceptions and an example of a course scheduling system. The introduction to OO concepts and Java are necessarily brief, but cover the ground pretty well.

There is also a short case study discussing the user interface approach taken by Java when compared with the traditional mainframe style. This study reappears briefly in the second part of the book when some Java code is compared with the COBOL equivalent.

The second part (about 100 pages) covers how Java and the OS/390 Architecture fit together, including a brief introduction to UNIX System Services, running Java in MVS batch programs, JRIO and interfacing Java with databases and CICS. This should be very useful for any beginning Java mainframe programmer.

The final part (50 pages) discusses Applets, The Java User Interface, I/O, J2EE and RMI - all briefly but usefully. This section leaves the reader wanting to know more about the topics covered.

In my opinion this is a useful book for the mainframe programmer moving to Java - it doesn't cover all that they will need to know, but does give a good basis to work from.

There were a few niggling errors such as misspellings, incorrect figure titles and so on, which seem to be present in most first editions of computing books these days. This is a pity because it spoils otherwise good books for the sake of proper proof reading.

On the whole I would recommend it to someone in its target audience, but there may be better-produced books available, hence my 'with reservations'. Recommended with reservations.