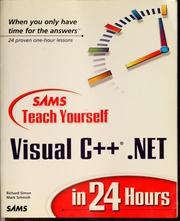 I find it quite humorous when I see these '24 Hour' books. Surely no one can possibly expect to learn something as complex as Visual C++.net in just 24 hours. In truth, this book should have been called 'Upgrade your existing Visual C++ 6 skills to Visual C++.net in 24 hours'. That would have been more descriptive but would not have excused the poor quality of the book.

In chapter 3 you are taken step-by-step through an MFC application and then a .net application so that you can see the differences. Sadly I could not get the .net application to compile. For a beginner this would be mortifying. I was just frustrated. At the end of the chapter I was told that I could use the code that was included on the CD. The only problem was that there was no CD shipped with the book. The back cover revealed that all of the source code was actually on the web site. After finally finding the relevant zip file I was amazed to find that the code I couldn't compile was not even in the zip file! I could easily understand if most people gave up here and just put the book in the bin.

I did, however, persevere. As I carried on with the book two things became clear. Firstly, this book is not for a beginner. It may be for beginners of the Visual C++.net compiler but not the language. A good C++ understanding is essential for this book. To be fair, this is stated within the introduction but not on the cover, or rear cover, of the book. Secondly, the book is (in my opinion) very poorly written and hard to follow. I did pick up some useful information but found it very hard work to go through the book and was quite glad when I had finished.

In conclusion I would not recommend this book to a beginner of the C++.net language and would only suggest it for Visual C++ 6 users if you are very short of cash and cannot afford a better offering.