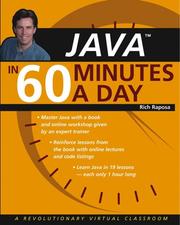 Java in 60 Minutes A Day

Yes, it is one of those large language in a small period of time books. Fortunately, this is one of the better ones, but not by much. It's fine for beginners and those who only ever really intend to dabble.

The book covers just about every aspect of Java, but not in great enough detail and definitely not as clearly as it should. For instance, it sets a task without having covered the methods required to understand it fully - and that's as early as Chapter 2, which spoiled an otherwise fine end of chapter assignment.

It also doesn't tell you how to run the compiled apps. I was caught out by that by trying to run an early example, but included the .class extension! It also assumes the user is working under Windows (though it does mention Unix/Linux being able to use it - it would have been nice if the author had said which Java to get and how to install it on a non-Windows platform).

As a memory jogger, it has it is uses. As a replacement for a decent course at your local college on Java, it is not up to the job.

I wasn't overly hopeful to start with and wasn't disappointed.