REVIEW - The Semantic Web - A Guide to the Future of XML, Web Services, and Knowledge Management 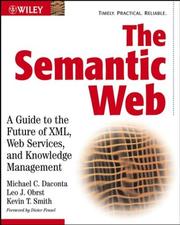 The Semantic Web - A Guide to the Future of XML, Web Services, and Knowledge Management

As a programmer I've noticed the term 'Semantic Web' is starting to get bandied around on various technical lists that I subscribe to. When I spotted this book on the list of those available for review it seemed like a good opportunity to fill in the gaps in my mainly self-taught knowledge.

And did it do that? Well yes, after a fashion. The book advertises itself as being for managers and senior developers, but really it is a whiz through the subject for the former, rather than the latter. A manager who reads this book attentively through will have a firm grasp of the jargon, but probably not the technology. A programmer will (probably) have an overall picture, but little to work with.

To be fair, the book does more or less cover its subject, and the authors have impressive qualifications in the field.

For those who haven't come across it before, 'The Semantic Web' is a term coined by Tim Berners-Lee to cover a new vision of the web where the content is machine readable as well as human readable. From a programming point of view you have not merely syntax, but also semantics which allows software to make 'intelligent' decisions.

The technology is, of course, built on XML, but XML is only the foundation. On top of that are the much-hyped Web Services, not to mention RDF, taxonomies and ontologies.

Unfortunately, I can't really recommend this book for a number of reasons. First because the high speed, zoom through the various aspects of the Semantic Web doesn't really justify the investment in reading time. Then there is the problem that a lot of the diagrams look as though they have been drawn by a drunken spider dipped in ink. (See for instance the graphical ontology example on p.183.)

But the real reason why I can't recommend this book is that the authors are boring writers. They are undoubtedly highly qualified, but, sadly, that doesn't mean they are good writers. I really wanted to know more about this subject, but if I hadn't undertaken to review this book I would probably have given up by halfway through it. The prose is really very pedestrian.

And my favourite quote from the book? 'A subject indicator is just a way of indicating subjects.' (p.174) Sorry guys, this one isn't going to make it on to my bookshelf.