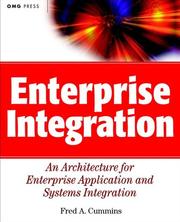 I did not enjoy this book. My main problem with it was that it seemed rather more interested in providing definitions of various parts of a system architecture, rather than describing their functions, and more importantly how they might fit together and why this would be a good thing. There was a complete absence of examples to illustrate points, which made the concepts in the book hard to grasp. The book as the feel of an exam crammer, which was not what I would have expected from the cover.

I also found the architecture described in the book rather prescriptive. It made recommendations (e.g. 'future business systems should be event-driven') without any discussion of what balancing choices might be necessary depending on system requirements or constraints.

The last source of irritation was the occasional redefinition of general terms to describe specifics. For example, the term 'loosely coupled' was defined as meaning asynchronous connections of business entities - whereas I would have considered this as a specific meaning of the phrase that has more general connotations (for example regarding build-time dependencies as well as run-time dependencies).

In summary I found this book somewhat disappointing. There may be people who would find it useful, but I would not recommend this for a general audience.