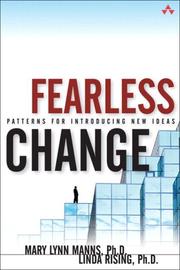 the result may seem obvious, but that is only after you have read them.

We live in a world where the context of our work and the tools we have for doing it change ever more rapidly. In the distant past, a change that had serious impact on individuals would have been rare. Things like the printing press had life changing impact on those who were alive. However, the norm was that you would still be doing the same job in the same way at the end of your life, as you were when you started.

It has proved very difficult for individuals to adjust to this new pattern to work, however it has proved even harder for companies to respond. Most companies have a good deal invested in the status quo; they will resist change.

The purpose of this book is to introduce readers to various aspects of pursuing change. The authors are attempting to help the innovators work effectively. Somehow, companies need to find the balance between the stagnation of zero change and the chaos of constant change.

The authors have borrowed the idea of patterns from software development and applied it to working for healthy change to organisations of which you are a part. Such organisations are not just companies, but include clubs, associations, families and churches.

This book describes 48 patterns for achieving change. Like almost all pattern catalogues the result may seem obvious, but that is only after you have read them.

I think that, whoever you are, this is a book that is worth reading.