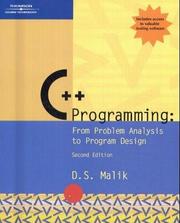 When I chose this book from the 'to be reviewed' list, I was expecting a book aimed at a reader who had mastered the basics of C++ (perhaps from the same authors C++ primer book), and was interested in progressing further.

It turned out that this book is aimed at building up a student's knowledge of C++ from a start point of little or nothing.

The style is fairly wordy, and includes copious examples of completed code. Unfortunately, the author does not explain why design choices were taken, or what alternatives were not taken.

As a course book, perhaps it is reasonable to not include anything but the briefest descriptions of which compilers might be useful. However, for any other readers this is in my opinion rather important.

The main complaint I had with the book is the actual content. Why was there no mention of polymorphism (other than a passing definition)? Why were three chapters dedicated to the implementation of linked lists, queues and stacks, with no mention of the STL outside the appendices? A description of the concepts would have its place - but the full source code seems over the top.

There is apparently 'valuable testing software' included with the book. This seems to consist of a series of acrobat files mainly consisting of examination texts. I was unable to access the website, as I had no instructor id.