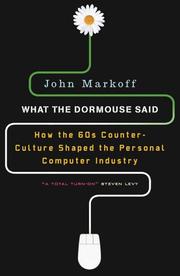 I;ve been waiting for this book to come out in paperback ever since I read aninterview with John Markoffin the ACM's online magazine, Ubiquity!

The perceived wisdom about the genesis of the Internet is that while hippies and lefties were out on the streets protesting about the Vietnam War, a small cadre of 'all American' engineers was busy laying the foundations of personal computing and ARPNet, the Internet's precursor.

I always thought this had to be wrong. You only have to look at the ethos of the early ARPNet/ Internet to see how hippy and power-to-the-people- ish it was. Even today, after decades of commercial activity, the battle still rages. Technically, the architecture of Internet remains fundamentally that of peer-to-peer, even though the majority of major applications are client/server oriented. As for the open/closed source program dichotomy - the battle is, if anything, fiercer than ever.

This didn't all happen by accident. As John Markoff's remarkable book shows, the personal computer and networking revolution was a product of US society on the West Coast in the late 60s.

The truth is that the architectural ideas and much of the technical work on things we take for granted about personal computing and the Internet came from people who were part of the San Francisco scene, they took drugs - including acid - and in many cases were real hippies.

To give just one example of the depth of the links, one of the camera operators at the first ever public demonstration of cyberspace on December 9th, 1968 was Stewart Brand, soon to become famous as the creator of the Whole Earth Catalog!

The book covers the period from the start of the sixties through to the infamous Bill Gates letter denouncing members of the Homebrew Computer Club for 'stealing' Gates's version of Basic for the seminal MITS Altair personal computer.

I really recommend this book for those who would like to find out the whole story of how the technologies that came together to make the network enabled personal computer came int existence. It may well be that personal computing and the Internet turn out to be one of the most enduring legacies of the 60s hippy movement!

Oh - and just what was it that the dormouse said?