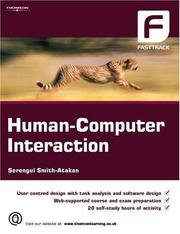 This book is part of the Thomson Fasttrack series, and appears to be a one-semester university course wrapped up in a book. It is accompanied by web-supported course work and exam preparation, and downloadable power point slides it says. This turns out to be pretty much one big pdf file with review questions and answers. There is one particular on-line case study, that of a ticket machine at a station which appears to be hijacked wherever possible. I read the original article by a group of academics and came away thinking, "all very well, but are we really paying these people to publish this stuff". It really felt like someone trying to make their publication list look bigger, without really having anything new to say.

It is split into 12 chapters, 10 if you discount the introduction and review chapters. The remaining 10 discuss natural computing, user modelling, user-centred system design, some very basic psycology, evaluation techniques, current and future trends of technology and universal access. I say discuss, it was really a matter of defining these things very briefly so that a student could be asked, "what is natural computing?", etc.

I was disappointed with this book. I was also worried about it. If students are using this as reference material and coming out of university thinking they know their stuff, then it doesn't bode well. True, there are reading lists with each chapter, exercises and review questions, but I felt the general level of information was very poor. It was a very repetitive experience. I kept thinking I was reading the same paragraph, because there were so many similar sentences, really making it feel like someone had a lecture course and coerced it into a book simply by padding it out with waffle. For example, chapter 5 is called Task Analysis. OK so far. 5.1 Introduction. Ok. 5.2 Task Analysis Hmm 5.3 What is Task Analysis Hmm!! 5.4 Approaches to Task Analysis, and each of these sections had numerous sentences begining Task Analysis...

More important, some of the content was either very out-dated or just plain wrong. One concept mentioned is User-Centred System Design, or USCD. This is presented as a methodology for producing software which is going to be usable. Their justification for it is to compare it to the waterfall model, which they do twice!

It's basically an iterative process, involving users (XP anyone?), BUT, in each increment, they are developing a "prototype". At the end of the iterations, when the users are happy, the "prototype" is "installed". Really, leave software development to people who know about it. I have no problem with iterations or prototyping, but they need to be used appropriately.

She goes on to describe the different ways of prototyping, Throwaway, Evolutionary and Incremental. That latter is the funniest; we are told that the system is built as separate components, with the final product being released as a series of components, each release adding a component until the complete product is delivered. What utter rubbish!

That said, I did come away with one or two new things. One is Jakob Nielson's set of 10 heuristics to consider when designing a system. Also, distinguish between "useful", "usable" and "accessible", the latter term hinting at another important point, that of considering not just one, or the "typical" user, but consider your design for all users. A lot of emphasis is also given to catering for disabled users.

But, I could have got that from a few-page discussion. The only reason I would suggest anyone buys this book is if they happen to be on that university course, and then I would emphasise to go off and find some in-depth sources of information. On second thoughts, I would recommend that you borrow your friend's copy.