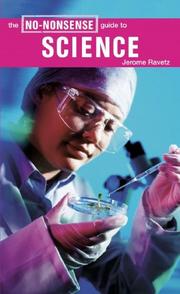 This book discusses science from the anti-science lobby to the pro-science lobby, discussing this spectrum with enviable objectivity. It quotes Bill Joy's GRAIN acronym - standing for Genomics, Robots, Artificial Intelligence and Nanotechnology. The downfall of science is given an acronym, M&M - Malevolence&Muddle - and its counterpart, SHE - Safety, Health&Environment - is introduced. The old, applied science is shown to have relatively few uncertainties whereas a new extreme PNS - Post-Normal Science - is introduced.

Conventionally, science is taught as a subject that moves inexorably from one discovery to another. This book details some of the errors made by key scientists in history - this does not belittle them, it makes them more human and makes their discoveries shine even brighter.

Although computer science may or may not be a science, ICT may be moving from being an "applied science" to a "Post Normal Science" where the stakes and uncertainties are high.

The role of political structure and high finance are discussed in a chapter on "Science and democracy" which has the following set of questions about new technology:

This book concludes with the old assumptions, the political questions and a table of personal questions so the reader can evaluate their own contribution to science.