REVIEW - Why Software Sucks-- and what You Can Do about it 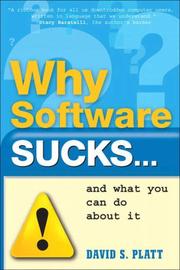 Why Software Sucks-- and what You Can Do about it

This book attempts to be a light-hearted summary of faults of computer software - with a certain amount of outraged rant regarding examples of poor design (i.e. even when the software works as it was supposed to, it is harder to use than it really ought to be). The prose is very easy to read throughout, with some humour (not laugh out loud, as the blurb on the back claims, but not bad).

The author has one basic message, which is reiterated with various examples throughout the book - 'know your user, for he is not you'. This works well as a leitmotif - the constant repetition being a useful underlining of the message.

An interesting (possibly intentional) feature of the book was that I felt that the early chapters applied to me directly. For example asking me to think about the way user interfaces are designed, with a good summary of security and privacy issues from a real-life, 'what will people really do' perspective. In particular I thought that the security chapter was excellent, as the author took a pragmatic view of balancing security versus usability rather than insisting on unrealistic (but notionally very tight) levels of security at all times.

Later chapters, describing programmers in rather extreme and stereotypical ways, left me a bit cold. Nothing wrong with stereotyping programmers as such - but I couldn't see how these chapters were aimed at improving software. I would certainly have preferred to have had more chapters along the lines of the first few - its not as if there is a shortage of examples of poor software design in the world.

In summary, generally a good book. However, it is let down by lack of focus in a couple of the later chapters. Perhaps these are subjects that Mr Platt is more interested in than me. Know your user - for he is not you. Indeed.